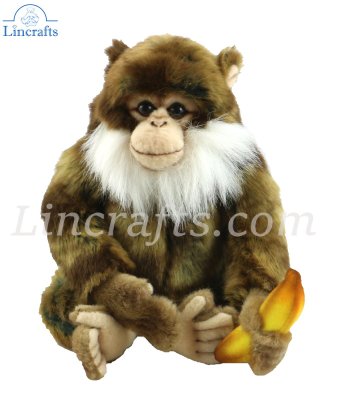 This Salem Monkey by Hansa is made from a super soft, luxurious, synthetic plush and is holding a bannana in its hand.

It is made to the highest standards from the finest materials and carries the CE label so it is safe for children and is surface washable.
Size approx. 7"(18cm) in height.

The main attraction of Affenberg Salem (Germany, near Lake Bodensee) is its more than 200 Barbary Macaques.

These monkeys live freely within a forest area of 20 hectares. A footpath guides visitors through the monkeys' home range, in which you can meet the animals face to face since there are no fences.

The Barbary Macaque, perhaps best known for a small colony living on the Rock of Gibraltar, is just one species of over twenty different types of Macaque. Macaques are highly interesting little creatures with an advanced living system. Within their social groups, they have a complex social structure and a strict hierarchy. Barbary Macaques differ from other Macaques by respecting a matriarchal system, and by the males taking an important role in rearing the young. Males will typically care for young regardless of paternity, perhaps because during mating females will mate with the majority of males in their group, meaning that paternity is uncertain. Generally Macaques of all ages and sexes take an active role in raising the young.
Interesting fact: Macaques are able to swim.

The Affenberg park has proven to be an ideal field for behavioural studies. It has enabled entire groups of Barbary Macaques to be reintroduced to their native homelands in North Africa.
Studies have shown that when one Barbary Macaque grooms another, its stress level is lowered. This can help explain the strong social bonds that are formed – and extensive grooming that takes place –between monkeys in a group.

Another reason for the low rate of negative interaction observed in Barbary Macaques is that males prefer to form alliances not only with those who are more closely related to them, but also with those who are above them in the hierarchy, thus avoiding conflict.

In the wild, Barbary Macaques eat mainly plants and insects – but this can provide a wide choice: they eat all parts of plants, as well as earthworms, snails, spiders, centipedes, beetles and many others. Barbary Macaques can live for up to 30 years. Males weigh around 15kg and females around 11kg. They have a diverse vocal range and an equally diverse range of facial expressions with which they communicate.
Interesting fact: the amount of food a Macaque can store in its cheek pouches is the same amount as can be stored in its stomach.

Despite the Macaque being the most widely distributed mammal on earth after humans – being found throughout Asia, North Africa and Europe – sadly in 2009 the Barbary Macaque was listed as an endangered species. Numbers in the wild have declined due to logging activity, and also due to poachers catching the monkeys to sell them as pets or for street entertainment. Farmers have also contributed to their decline, because they see them as pests which threaten their crops. Today less than 21,000 are estimated to exist in North Africa.
This makes parks like Affenberg all the more important: they provide a colony of Macaques with a habitat that is more natural than a zoo and less threatening than the wild. 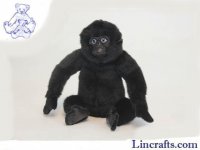 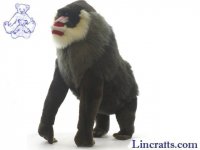 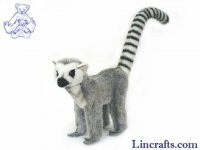 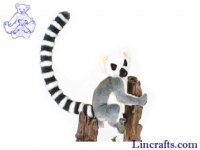 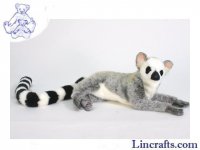 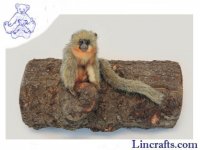