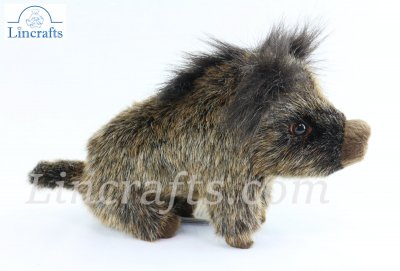 This Wild Boar by Hansa is in a sitting position and is softly stuffed but firm enough to maintain its pose. The fabric is flecked and appears course to reflect the true appearance of the animal but is also soft to the touch.

It is made to the highest standards from the finest materials and carries the CE label so it is safe for children and is surface washable.
Size approx. 8.75"(22cm) in length.

Wild boar is a close relative of domestic pig. There are four subspecies of wild boar that are similar in size and appearance, but differ in colour (which depends on the type of habitat). Native populations of wild boars can be found in Africa, Europe and Asia (Japan, Indonesia, India and the Far East). Wild boars can survive in different types of habitat: grasslands, taiga, tropical rainforests, but they prefer life in deciduous forests. Wild boars are threatened by habitat loss and by commercial hunt. Luckily, wild populations are still stable and they are not listed as endangered species.

Body of wild boars is covered with double coat of fur that can be brown, red, black or grey. Upper coat is composed of harsh, bristly hair. Undercoat is much softer.

Tusks on the bottom lip are one of the most prominent features of a wild boar. Tusks in males are longer and curved. Unlike females, males possess extra tusk on the upper lip which is used for sharpening of the lower tusk.

Males use their tusks for the fights during the mating season. Wild boar has long, rubbery snout that is used for digging of underground roots and bulbs.

Wild boar is an omnivore (eats both plant- and animal-based food). It feeds mainly on the seed, fruits, leaves, berries, eggs, mice, lizards, worms and snakes.

Wild boars are nocturnal animals (active during the night). They will spend 12h in sleep during the day, hidden in the nests made of leaves.

Although large, wild boar has a lot of enemies. Main predators of wild boars are: tigers, leopards, lynx, wolves, bears and humans.

Wild boars live in groups (called sounds) that are composed of females and their offspring. Groups usually have between 6 and 30 animals.

Males live solitary life, except during the mating season.

Mating season usually lasts from November to January. Fights between males determine which male will have opportunity to mate.

Pregnancy in females lasts 112 to 115 days and ends with 4 to 6 piglets. Mother takes care of the babies on her own. Piglets are born in the nest made of leaves.

Piglets have brown fur, covered in creamy-colored stripes, which provide camouflage in dense vegetation. Stripes begin to disappear when piglets reach the age of 3 to 4 months. At the age of one year, young animals have the same coloration as adults.

Young wild boars depend on their mother for the first couple of months of their life. At the age of 7 months, they will become independent.

Wild boars can survive up to 10 years in the wild and up to 25 years in captivity. 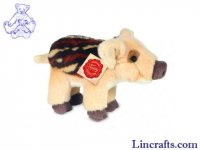 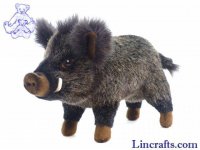 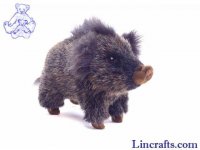 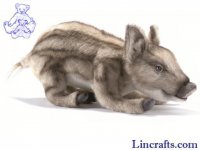 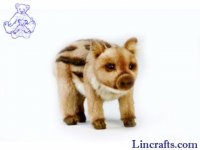